I have not updated my blog for two years. The reason? Well, I have been putting all my time and energy into something. I was so fully committed that I even quit my job for it. That something is to create a permaculture food forest.

The purpose of my food forest was, of course, to produce food for consumption. Permaculture principles were the guiding principles when I created and designed my food forest. Rather than the conventional way of growing just a few crops in neat rows and frequently applying fertilizers and watering, I grew a large variety of different crops, trees, shrubs, vegetables, spices and herbs. I created habitats for the different organisms in my food forest, both above and in the soil. We had two smalls ponds in the forest and a larger one by the side of the forest, attracting a variety of aquatic creatures (frogs, dragonflies, etc.) To improve the soil, I added a lot of organic matter to it, not by purchasing large quantities of fertilizers/compost and transporting them to my food forest, but by growing cover crops and plants (such as legumes) and then digging them into the soil or mulching them on the soil. Biodiversity brings stability in my food forest. The more diverse my crops, weeds, insects, birds, soil creatures (including microbes) were, the more stable, healthy and productive my food forest would be.

In permaculture, humans produce food by working with nature. However, most of the food the we eat today are produced by factory farming, which has no or very little regard for nature.

I have been dreaming for a permaculture food forest for over two decades. In June 2013, my wife and I rented a greenhouse in Neo Tiew area and started growing vegetables organically. After a few months, my wife and I decided to rent the open area (860 square metres) just outside the greenhouse to create a permaculture food forest. In the following months, we worked very hard almost everyday. We even worked in the farm on New Year Days and Chinese New Year Days.


After a year's of hard work, with friends coming to the farm to help on Saturdays, our food forest began to take shape. We had over 50 different crops: trees, shrubs, vegetables, spices and herbs, some of which were grown in order to revitalize the soil. Our roselle plants were doing especially well - prolific and producing red calyces of superior quality. We had more than 60 roselle plants in our food forest! The soil had improved tremendously. I did not test it scientifically, but I could see and smell it. The soil creatures must be thriving.

You might have noticed that I have been using past tense in the paragraphs above. Yes, because, sadly, our food forest does not exist any longer. It was suddenly destroyed by the landlord on 29 May 2015.

In the morning of 29 May 2015, the landlord's workers came to our food forest with their excavators and bulldozers. They dramatically eradicated all the trees and plants. In just 3 days, they completely cleared everything in our food forest, which my friends, my wife and I took almost two years to create.

The landlord said he is going to let a big company come in. I don't know what this big company will do on the land with their big money. If they are going to lay concrete on the soil, that's death sentence to the soil (yes, healthy soil is very much alive, with microbes and so many soil creatures). It is always sad to see soil being killed in this way, even on designated agricultural land in Singapore. An example is growing vegetables in huge and sophisticated-looking glass greenhouses (which almost totally shuts off nature) built on concrete-covered soil.

People are so disconnected from nature and soil, on which our own survival depends. 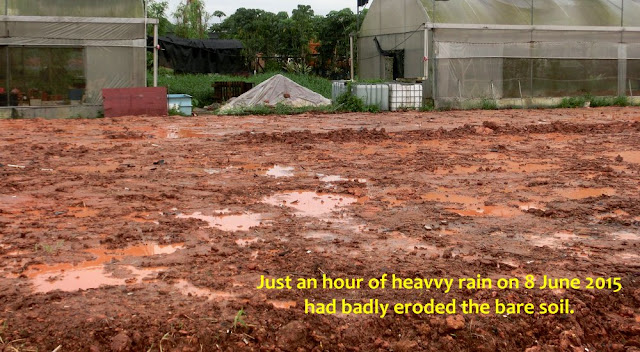 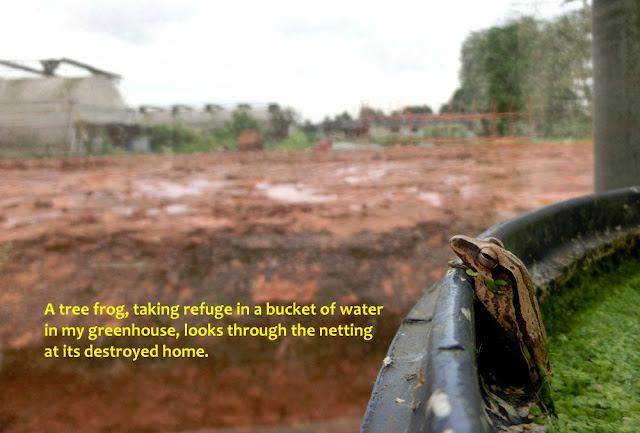 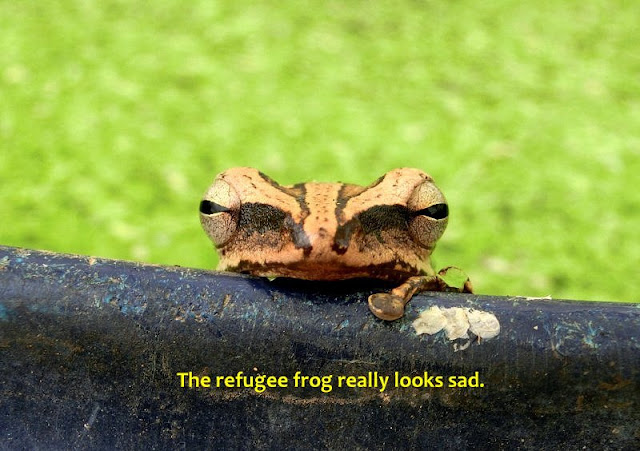 It is really saddening to see that the healthy soil I'd been helping to restore in the past 2 years had been reduced to muddy clay in just a week's time. The following video shows the soil after the workers had just dug it up, on 30 May 2015.